The highest ice-free flood ever

At the end of March 2006, a flood wave started on the Danube, which exceeded the highest ice-free water level observed so far. On January 1, 2006, the water stock stored in snow in the drainage area of the Danube was 11,13 km3, which reached 15 km3 in the first week of January, then 17 km3 in the last ten days of the month and exceeded 20 km3 in the period between February 7-18. This water stock was double, sometimes three times as much as the January-March average of many years.

As a result of the warming at the end of February and beginning of March, melting began in a 500-1000 metre band, which ended with a 300-350 water level between February 19-28. After that, the water stock stored in snow decreased to 15 km3 until March 4. IN the first two weeks of March, intensive precipitations took place, which were liquid until 1000 m and solid above that. This cased a smaller flood from March 12, which reached its highest level in Budapest on March 14, with a water level of 424 cm.

From mid-March, intensive precipitations took place again, primarily in the western and northern drainage areas. As a result of the front systems arriving in several waves, the height of the 1 degree zone varied between 800-2000 metres. The higher values (10 oC in territorial average) were characteristic of the end of the period. As a joint result of the warming and the precipitations, the melting of a significant quantity of snow began also in higher regions and continued in the zones of the drainage area located below 1000 metres. On April 2, a smaller flood wave started from the Bavaria section, while ullage was observed in Upper-Austria. The new flood wave reached the previous one in the area of Lower-Austria, thus predicting longer high water levels. On March 30, flood waves of 3rd degree were created on the Morva (800 m3/sec) and the Vág (1200 m3/sec) as well. The longer high water levels on affluent, continuous water supply coming from the upper drainage area predicted a water level exceeding the highest water level (HWL) of August 2002 of 848 cm at the Budapest water level measurement. The intensive snow melting continued in the mountain region. On April 4, a moderate ullage started on the Bavaria section, while lasting high levels were observed on the Morva with really high water levels. The flood wave on the upper section of the Vág was well into ullage, while ullage speeded up on the Garam. In Budapest, the highest level happened on April 4, 2006 between 1600-1900 with a water level of 860 cm, which exceeded the August 2002 HWL of 848 cm by 12 cm. Following this, a moderate ullage was observed, 1 cm per hour between April 5-7, then 2 cm per hour from April 9. 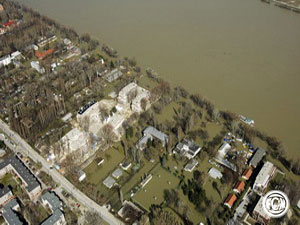 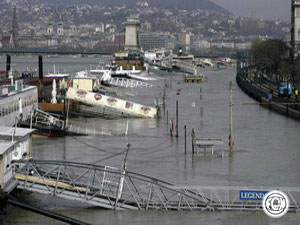 The Danube river is generally characterised by early spring floods (following melting in the Alps), as well as summer floods occurring more and more often since the last decades due to great quantity precipitations falling in the Alps, and whose date is unpredictable. Such was the August 2002 floods as well, whose highest level exceeded the highest ice-free water level measured that far. A common characteristic of both is the quick run up, but whilst following the 2002 flood wave, it shrank quickly to a medium water level due to the stoppage of precipitations, at this years, as a result of the great quantity of melted snow and the precipitations, it paired with long lasting, slow ullage with a high bed fullness. On the following chart, you can see that on the 5th day following the highest level, the water level was 387 cm in 2002 and 750 cm this year. In 2002, a water quantity of 8240 m3/sec flowed through the Budapest section at a highest level of 848 cm, this quantity was 8520 m3/sec at a water level of 860 cm on April 4, 2006.

North-Buda
As in 2002, we had to build gripping dams in 2006. Leakages appeared in these counter-pressurising basins in 2006 as well. Their catch was eased by the water level kept at constant height (20-40 cm) in the basins and the sandbag circle built locally. 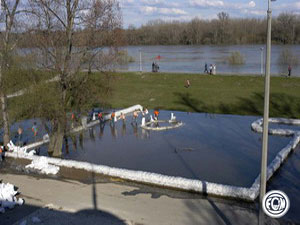 Currently, Római bank is protected in the III district south from Pünkösdfürdő street to the estuarine of the Aranyhegyi stream by the cross-section-free summer dyke reinforced during the 1965 flood. The summer dyke is cut by 54 breakthroughs. We have applied lining beam-closings at the breakthroughs, which have been reinforced with clay back-filling in case of greater spread. On segments forcingly lacking sections at bus stops, the protruding of water into the saved side had to be prevented through sandbag closings. Due to greater water load coming from terrain characteristics, the dyke had to be reinforced with supporting embankments just as in 2002, north from Mátyás király út in the III district, in a length of 700 m. No flood incidents occurred in the supported area. At public utility conduits built in without leakage preventing structures, the leaking water caused cavities on the saved side and damaged the road foundations, which had to be equipped with a loading dam on a length of 400 m. In the area, we have to note that not all newly built public utility connections are equipped with appropriate leakage prevention, thus the flood fighters experiences erosion and cavities in several cases.
One of the most difficult areas to protect in the capital city is Római bank. Between the estuary of the Barát stream and Pünkösdfürdő street in the III district, a primary protection structure made of gravel was built at the beginning of the 1980s. The collection of the water leaking through the body of the dyke is ensured by the sole leaking of the saved side, and a great performance pump station operates at its end-point. On this section, on the Kossuth Lajos holiday shore, counter-pressurising basins had to be created and water gushes due to public utility failures had to be eliminated. The protection works, primarily the execution of the closings, loading and supporting shoulders of the Királyok útja-Nánási út section-free protection work occupied considerable manpower and machine work. 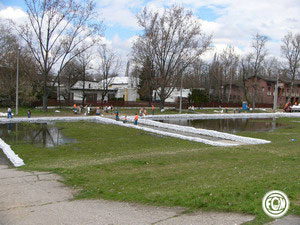 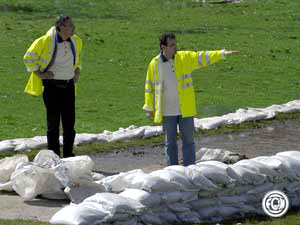 Central Buda
We have built loads and counter-pressurizing basins on this segment at lower laying closing manholes and sinkholes. The priority of the protection was on Bem quay, where we had to operate a partial traffic restriction as mentioned before. 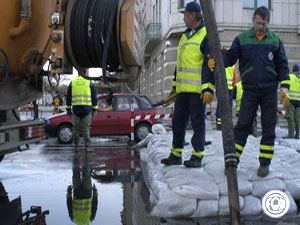 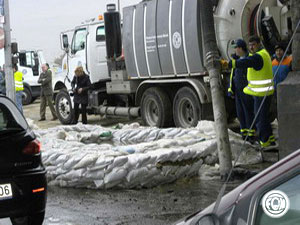 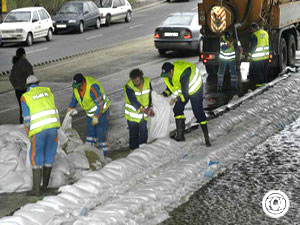 South-Buda
The 2002 flood caused significant trouble in Dunatelep located in the XXII district, which was then protected by the temporary dyke heightening built in 1965. For security reasons, 540 persons were temporarily evacuated from the area. The final main protection line was finished by the end of 2005, being a flood protection wall realized as a weight supporting wall on a section parallel with the Danube and was built as a crown level soil dyke in accordance with the requirements. The protection works excellently made their proof, basically without rising water and leakages. The leakages observed in 2002 did not occur despite the long lasting, quite high water level due to the gobbing of wells located in the band along the shore.

North-Pest
The round dyke of the North-Pest Biological Wastewater Treatment Plant, which showed a significant number of flood phenomena in 2002, was reinforced in 2003-2004. Behind the dyke body made of sandy gravel, we have built an about 100 m wide heightened shore, through which we have finally resolved the flood protection of the wastewater treatment plant. No flood phenomena were observed at this flood. No tasks exceeding those of eliminating smaller, simply manageable flood phenomena occurred. The high water level however drew the attention to sections lacking height, the development of which is definitely necessary.

South-Pest
On the South-Pest section, whose major part is given by the Csepel Island, there was no situation that would have needed a special intervention.

Margaret Island
Just as in 2002, the protection of Margaret Island was a task of predominant importance. The delivery of the materials needed for the protection and the construction of the temporary dykes started on March 31. The construction industry companies participating in the protection and ensuring the machinery, as well as the fire department and military, continuously present with great headcount and the many volunteers working under the technical management of FCSM built in 210 thousand sandbags. The works performed here were executed in a total length of 5500 meters. The dyke was characteristically 2-5 bags high and double lined, but even wider on the most endangered sections (Sports Swimming Pool, Casino) and had film laid out on the water side and striated support on the saved side. The sandbag protection works could have provided protection against a water level of 900 cm as well. The leakages and water flushing up on sinkholes were localised through counter-pressurizing basins. Rising water occurred in the central, lower lying zones of the island. Traffic was continuously ensured through deflecting dykes at these points. A total of 771 persons took part in the heightening of the protection works under the control of the experts of FCSM. 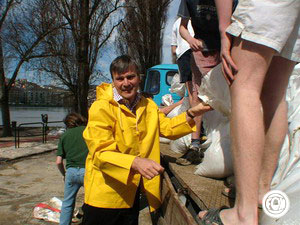 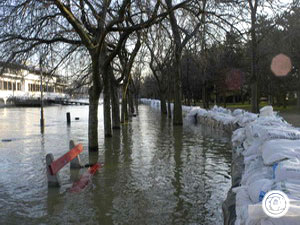 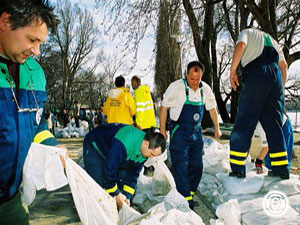 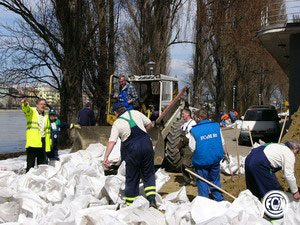