The wastewater treatment plant is operated on the basis of environment-friendly and proven cleaning technologies, making use of the energy potential of sludge and solid waste at the same time.

The wastewater treatment capacity of the plant is 80,000 m3/d which equals to 22 million m3 per year. The plant continuously treats the wastewaters of about 300,000 inhabitants of the 18th, the 19th, the 20th, and the 23rd district of South-Pest and the companies operating there.

The French and German shareholders considerably contributed to the modernization of the plant. Their experience in operating treatment plants and their technical know-how enabled the optimization of the plant and the completion of the technological processes applied.
The plant belongs to the most modern ones in Europe with regard to its technology, its equipment and its cleaning completeness.

Double stage biological filtration is seldom even in Europe. As a result of this, the quality of the treated water routed from the South-Pest Wastewater Treatment Plant into the receiving water, the Ráckevei-Soroksári Danube, exceeds the European standards. The biological filters were set up with French technology and German equipment; the new gas engines are Austrian products, whilst the organic waste receiving and treatment station, as well as the thermophilic digester unit operate with French technology. The transformation of biogas produced in the plant to electrical and thermal energy is environment-friendly and cost efficient.

The National Planning Office determined the location of the plant designed to treat the effluents of Pesterzsébet, Kispest and Pestlőrinc, on 23 December, 1952.
Despite of multiple modifications in the investment plan, the plant was constructed without interruption and is in full operation since 14 September, 1966. Sludge treatment was added in 1967.

The extension of the plant was started in the 80’s:

The hydraulic capacity was further expanded in 1992, when the new mechanical pre-treatment unit was built, also ensuring removal of grease and sand from the effluents.

In 1997 new shareholders (the French Veolia Water and the German Berlinwasser) invested in the Budapest Sewage Works Ltd., which resulted in a significant quality development in the South-Pest plant. The wastewater treatment and the sludge treatment sections were renewed and complemented. In 1999 the plant became capable of full biological treatment of 80,000 m3/day wastewater, including nitrogen and phosphorus removal. This was achieved by the extension and modernization of the water line. The flow direction of the effluent was changed and optimized in the activated sludge unit, and fixed bed biofilters were added for nitrification and denitrification of ammonia compounds.

In 2001, the sludge treatment process was renewed and extended: a new covered gravity thickener equipped with a biofilter for odour removal was built, the centrifuges serving the automated sludge dewatering were put in operation, the gas engine producing electric energy from the produced biogas, and the biogas desulphurization unit were also started up.

In 2005 the high nutrient containing waste receiving station was handed over and the biggest thermophilic sludge digester of our country, as well as an additional high capacity biogas engine started operating.

In 2007 the capacity of the activated sludge pools aerators was upgraded, a new aeration unit began opertaing, and the sludg silo for the temporary storage of dewatered wastewater sludge was built.

In 2009 a piece of equipment for separating thready materials, and a new heat exchanging engine house started operating, a semi-industrial digeseter was presented. 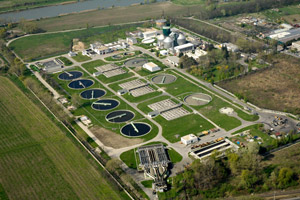